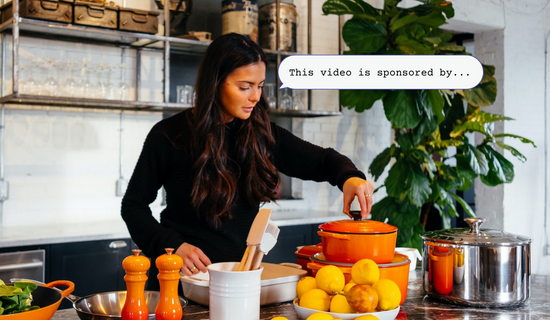 Let’s not beet around the bush - food channels are hot commodities on YouTube. Food challenges, daily food vlogs, mukbangs, and foodie adventures all around the world are just some of the niches that exist within the foodie community on YouTube. Over the years, brands have caught on to this increased interest in food content creators, and have found a way to integrate their brand and products into these creators’ videos. In fact, some of the biggest sponsors of food content on YouTube are brands that aren’t necessarily food related, highlighting the fact that stepping out of your niche (both as a brand and as a creator), may not necessarily be a bad thing!

ExpressVPN is a VPN service that encrypts users' web traffic and masks their IP addresses and is also the top sponsor of food and cooking channels on YouTube. ExpressVPN’s top collaboration is with the adventurous channel, The Food Ranger. The Food Ranger travels all around the world to get a taste of the street food and local food available to him, and, lucky for us, he takes us along for the adventure. The Food Ranger has 5.49 million subscribers and regularly accumulates hundreds of thousands of views, so it’s no surprise that The Food Ranger and ExpressVPN have teamed up close to 50 times and received an average of over 3 million views.

Stephanie Soo, a food channel that focuses mainly on mukbang content, has also built a strong partnership with ExpressVPN. Having collaborated 22 times, they have received over 10 million views! It definitely makes sense - Stephanie has over 2.6 million subscribers and is used to receiving 400 to 500,000 views on each one of her videos.

Even though ExpressVPN is in no way a ‘food brand’, it’s actually one of the top companies that invest in YouTube foodie sponsorships. It actually makes sense that this VPN company sees content creators as great marketers - who better to explain the importance of cyber security, if not hungry content creators? For example, The Food Ranger knows how important it is to keep his online information safe, as a content creator who is constantly traveling to new destinations. Stephanie Soo also knows the importance of a secure online presence - she has shared a number of true crime stories during her mukbangs that continuously highlight the importance of making sure you’re staying safe on the internet and computer. By incorporating the sponsorship mid-bite, viewers are at the peak of their engagement.

With Squarespace, you have the ability to make your very own website in a matter of minutes with the help of thousands of ready-made templates Squarespace provides for you. According to our data, Squarespace has sponsored over 130 YouTube videos,  and one of those videos was in collaboration with food influencer, Adam Ragusea. In fact, Adam and Squarespace collaborated over 70 times and have currently garnered over 99 million views on their collaborated content.

Babish Culinary Universe is another collaboration that has proved incredibly successful for Squarespace. This cooking channel is known for recreating foods and recipes from movies and TV shows and built up its community to over 9.1 million subscribers. The videos that are in collaboration with Squarespace have received over 121 million views, which definitely equates to a fair amount of brand broadcasting.

Adam Ragusea is very much an all-encompassing food channel - he makes content about food recipes, food science, and culinary culture, and he also manages to seamlessly mention the sponsors of his videos. When it comes to Squarespace, Adam Ragusea never fails to think of a fun and unique way to mention the brand, highlighting what the brand is known for, while not making the viewer feel too disconnected from the video they chose to watch. Both Adam Ragusea and The Babish Culinary Universe take the time to highlight their very own websites which were produced with the help of Squarespace, a platform that allows them to share their recipes, cookware, and merchandise, among other things. This way, the viewers get to see just how easy Squarespace makes the process of website creation.

HelloFresh is a food subscription service that sends you the right amount of ingredients and the easiest recipe to follow right to your door, and it makes sense that it’s one of the top brands that collaborate with foodie channels.

One of the top partnerships HelloFresh has is with Mike Chen, a food YouTuber that eats food around the world, vlogs his eating experiences, and occasionally undertakes food challenges. This channel of Mike Chen’s has 1.53 million subscribers, and, together with HelloFresh, the content they’ve collaborated on has accumulated over 23 million views.

Though Mike is often traveling to new foodie destinations all around the world, he mentions how great HelloFresh is for him as a self-proclaimed ‘hater of grocery shopping’. He knows that when he gets home from all his travels, there’s no need to worry about groceries at all, giving him more time to create more food content for his viewers. The honesty that he shares with his viewers is no doubt one of the reasons why this partnership continues to thrive.

Magic Spoon is all you could want in a cereal - high-protein, low-carb, and extremely delicious. Magic Spoon launched in 2019 and has already begun to venture into the realm of influencer marketing. Over the years, Magic Spoon has sponsored channels from a variety of different sub-niches, including BookTubers, nerd-culture channels, and of course, foodies.

ErikTheElectric describes himself as ‘a guy with a huge appetite that loves food’, making his success not only as a food channel understandable but also his long-running partnership with Magic Spoon. Even with all the food challenges that Erik undertakes, he still tries to maintain a somewhat healthy lifestyle, and so it makes sense that a cereal company that advertises itself as a healthy alternative would want to partner up with someone like Erik. Erik can successfully highlight the fact that with Magic Spoon, you get the best of both worlds - a healthy meal that’s also incredibly delicious. Magic Spoon and ErikTheElectric have collaborated 7 times, racking up 6 million views.

Both Mike Chen and ErikTheElectric have mentioned their love for cereal time and time again. So, when they point out that Magic Spoon’s cereal helps them overcome their craving for the breakfast must-have, the viewers are bound to believe their authority on the topic and will allow themselves to purchase a box (or three, nobody’s judging) for themselves.

Additionally, ErikTheElectric specifically has taken on a number of cereal-related food challenges on his channel, so he obviously has the authority and knowledge when it comes to delicious tasting cereal, and knowing that Magic Spoon is truly worth it.

Skillshare is an online learning platform that offers thousands of creative courses and classes that are taught by experts to help you learn new skills. Skillshare is another one of Adam Ragusea’s top sponsors. Together, they’ve been able to surpass 17 million total views, which is pretty impressive.

When you think about it, it actually makes sense that Skillshare is one of the top food channel sponsors - as a platform that provides people with the tools to learn new skills, the food business has a lot of skills available to you to learn. Food photography, food videography (like the videos that Adam creates), cooking, and baking are just a few that come to mind, and there’s no doubt that Skillshare is the perfect platform for you to get a start on learning these skills.

Foodie channels will continue to gain traction on YouTube, and that’s because viewers enjoy watching their favorite creators cook, eat, and document their foodie adventures. Food is intimate (there’s a reason why first dates surrounding food are so awkward), and so creators that are comfortable enough to share their food habits and lifestyle are able to quickly build that close relationship with their viewers that many content creators work for years to get to. That level of intimacy and, ultimately, comfort is ideal for brands - when they sponsor food-based YouTubers that have reached this level of trust, they increase their chances of not only getting the viewers' attention but their engagement with the product/service as well.

If you are a food-based creator interested in scaling your YouTube sponsorship, let us help you match with relevant brands.

If you are a brand interested in tapping into the food category on YouTube, we can help you cherry-pick the best channels.

Why brands should look at a YouTubers sponsorship score