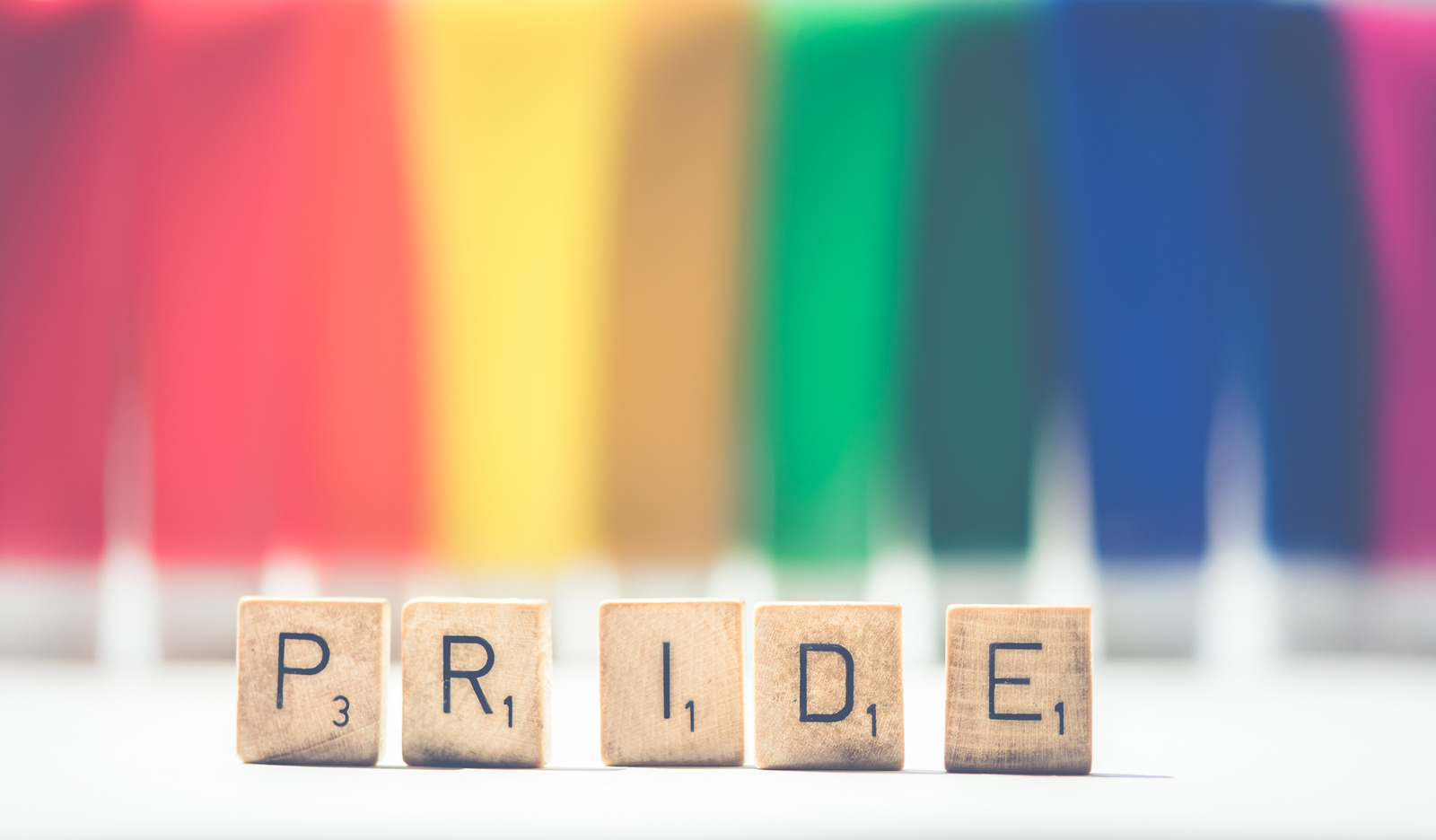 With most countries across the world still in some state of lockdown, Pride celebrations are looking a little different this year. Social distancing and Pride parades are not natural bedfellows, so rather than pasting their logo all over a Pride float, this year brands are forced to find different ways of marking Pride month and showing their solidarity with the LGBTQ+ community.

When did Pride marketing become so important? Matthew Waksman, CSO and Founder at Love or Fear explains: “When it comes to Pride, it’s not surprising that we’re now all jumping in feet first. A heady combination of the pink pound, creative reputation, Gen Z relevance, and a chance for a positive social message has created the must-have brief. ‘The Pride Brief’ is now appearing as an established spike on clients’ content calendars alongside Valentine’s Day.”

Each year, there are companies whose attempts at some kind of Pride marketing smack of lazy pinkwashing. The campaigns that are guilty of this misstep are the ones that make tokenistic use of the LGBTQ+ struggle or provide a very shallow picture of what Pride actually represents.  When brands get this wrong, at best they sound disingenuous, and at worse, they actively insult the community they are aiming to support.

Here are some ways that brands can engage with Pride and the LGBTQ+ community without resorting to pinkwashing:

We want more than just a rainbow

Last year, Listerine launched the pride-friendly mouthwash that no one was asking for:

Cue the jokes about Listerine “leaving a bad taste in people’s mouth,” and as expected, Gay Twitter did not pull its punches:

at last i can wash my gay hair and rinse my gay mouth while feeling truly seen pic.twitter.com/QhQuwiaf7c

Also last year, Marks and Spencer, the British retailer, famously offered a Pride-friendly sandwich, adding Guacamole to the English sandwich stalwart that is the BTL (Bacon, Lettuce, and Tomato, for those not in the know) to transform it into an LGBT.

The sandwich and the company were met with derision, despite M&S’s declaration that they were donating £10,000 to LGBTQ+ charities. Similarly, the ridicule that Listerine met with wasn’t tempered by the fact that their parent company Johnson & Johnson has donated over $1 million to LGBTQ+ nonprofits since 2011 through their Care with Pride program. Clearly, when the marketing doesn’t work, the brand is in danger of jeopardizing the positive brand connotations connected with this kind of charity work.

Don’t be afraid of a touch of humor

Waksman points to a great example over in the UK during the 2018 World Cup campaign. Paddy Power, the betting company, staged a tongue-in-cheek rebuke of Russia’s abysmal LGBTQ+ rights record. They turned Russia’s national soccer team into unlikely LGBTQ+ activists by pledging money to support LGBTQ+ charities for every goal the team scored. The campaign was amusing, head-line grabbing, and very effective.

Another great example of using humor effectively is Harry’s Shave with Pride campaign:

A big thank you to the lovely folks helping us celebrate Pride this year. Here's the rest of the crew teaching us a thing or two about self-expression, and challenging some misconceptions while they're at it. #shavewithpride

The witty social media campaign was accompanied by the release of a limited edition shaving set with rainbow-themed handles. Better yet, Harry’s announced that all of the profits would go to The Trevor Project, a charity that focuses on suicide prevention for LGBTQ+ youth.

Ben and Jerry’s are also the masters of combining humor with purpose-driven marketing, having famously rebranded two of its flavors in support of same-sex marriage: Chubby Hubby became Hubby Hubby, and their apple flavor was rebranded Apple-y Ever After. Incidentally, the brand’s recent impassioned support of the Black Lives Matter movement is also being held up as an exceptional example of how companies can voice their support for social justice.

Support LGBTQ+ voices by sponsoring them

There are many brilliant LGBTQ+ creators whose content you can support (and not just during Pride month).  These thought leaders speak directly to the LGBTQ+ community and understand firsthand that the internet can often be a scary place for queer people in the public eye.

Some of our favorites include:

Hannah Hart (2M subscribers, 121K avg. views, 5.0% audience loyalty) who shot to internet fame with My Drunk Kitchen back in 2011, and has since written a best-selling pseudo cookbook, starred in a Netflix movie and worked with Buzzfeed’s Tasty on a series called “Edible History”.  Hannah has an LGBT+ playlist on her channel with videos like “Dating a Bisexual” and “How did you know you were gay?”

The Read (1.5 million listeners per month) is hosted by Kid Fury and Crissle West and offers a weekly discussion of pop culture, queer issues, and examples of black excellence. The duo is impassioned, hilarious, and pretty addictive once you start listening. Last year, their podcast was adapted into a talk show on Fuse, with guests featuring Missy Elliott, Lena Waithe, and Issa Rae.

Tyler Oakley (7M subscribers, 60K avg. views, 0.8% audience loyalty) has been making videos on YouTube since way back in 2007 and launched a podcast with Korey Kuhl in 2014.  Since Oakley began his rise to internet fame, he has managed to amass an enormous audience and uses this platform to shine a light on LGBTQ+ politics. He has also raised over a million-dollar for The Trevor Project and is one of the co-hosts of the charity’s annual red carpet event, TrevorLIVE.

Get your existing brand ambassadors on message

Even if the thought leaders and channels you are currently sponsoring haven’t built their platform around LGBTQ+ issues, you can ask them to address these themes during Pride month on any content you might be sponsoring with them during this time.

Here are some easy ways for creators outside the LGBTQ+ community to engage with these topics:

Salesforce is a great example of how a company can use their presence during Pride as a springboard for activities that support the LGBTQ+ community throughout the rest of the year. Salesforce promotes LGBTQ+ equality through Outforce, the company’s employee-led LGBTQ+ affinity group. The group participated in 27 international Pride events in 2018, and 2,600 Salesforce employees marched in Pride parades.

Earlier this year, Salesforce hosted an event in London titled ‘Now You See Me’, exploring the representation of LGBTQ+ people in mainstream media. Co-founder Marc Benioff has been a vocal supporter of LGBTQ+ issues and explains his support as follows: “What we’re doing is advocating on behalf of our employees. We’re a company of 20,000 employees. We obviously have thousands of LGBTQ employees as well. And they expect us to take a position and advocate on their behalf.”

Another important way for brands to support this community is normalizing the use of LGBTQ+ individuals in their marketing. Starbucks illustrated the power of this kind of recognition with their #whatsyourname ad campaign in February of this year, which features a trans man who is continually misgendered and called by his birth name, until venturing to a Starbucks to try out his name for the first time.

The campaign was praised as an authentic trans story told by a major brand, and had a further impact because of the timing: this clearly wasn’t a Pride month box-ticking activity but was something far more impressive: representing a marginalized community and showing the active role that the brand can play in their journey.

To really speak to the LGBTQ+ community and avoid pinkwashing, brands need to show that they are engaging with these issues for the right reasons. Rather than capitalizing on the LGBTQ+ struggle, brands need to be active allies in helping to spotlight and alleviate these struggles.