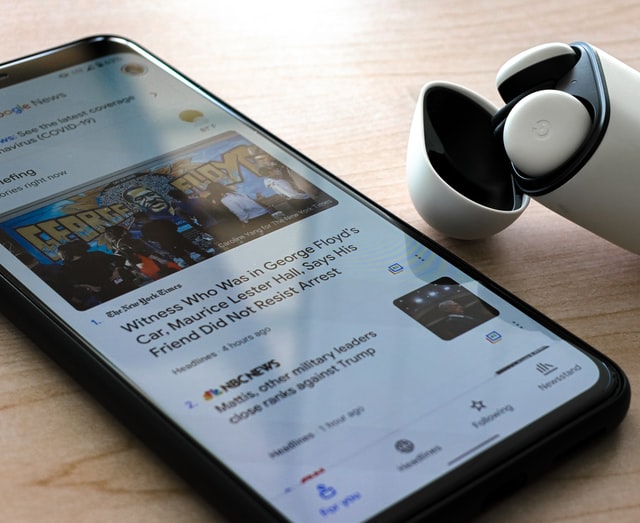 Since the creation of modern media, news has always played a role in its development and adaptation-- from FDR’s fireside chats, to NBC’s first television news broadcast in 1940, to modern day cable news networks such as CNN, audiences have always been interested in what is going on. In fact, even news that wasn’t true helped with the progression of media and journalism, such as the 1938 reading of The War of the Worlds, produced by Orson Wells, which aimed to mislead listeners into thinking that aliens were invading Earth.

Flash forward to 2021 and some of the most popular media out there is news related, with many cable network channels dedicated solely to news, and many publishers on the internet focusing their content around news as well. We’ve also noticed a big shift in audience’s trust of news networks and many listeners are moving away from traditional news sources (CNN, FOX, MSNBC, etc.) and finding other voices to listen to. By doing a quick search on the ThoughtLeaders platform with the keyword, “Fake News” we can see that this concept is still quite prevalent today and it’s mentions continue to rise.

With this lack of trust from modern media, news/politics related podcasts have thrived. Let’s take a look at some of the top players in the podcasting news world:

With both a popular YouTube channel and podcast, David Pakman’s name has become synonymous with progressive political news. Originally a radio host in the Amherst Massachusetts area, he uploaded his first video to YouTube in September of 2009, showing him in the studio discussing the future of uploading his “live in the studio” radio clips to YouTube. At the time he had already established himself as a reputable talk show host and in his first video even touches on his interview with Shirley Phelps-Roper, a member of the Westboro Baptist Church, who was quite the prolific figure at the time.

As the years progressed he continued his radio show, “Midweek Politics with David Pakman,” uploading 5-6 minute clips from interviews that aired on the show that week. Eventually he moved away from “live in the studio” type interviews and the show was more focused on news, with Pakman being the sole reporter and him sharing more of his personal feelings about each store. Most of these interviews accrued less than 1,000 views on each video with the majority of his listeners not tuning in on YouTube.

Around the year 2014, Pakman’s show took on a more professional edge, he started to record in his own studio with an increased production value, at this point we start seeing more brand sponsorships on his channel and plugs for his Patreon to his fanbase.

Jumping to 2021, he has nearly 1.5 million subscribers, nearly 50k average views on his YouTube videos, 4.6 star rating on Apple Podcasts, and over 300k followers on Facebook. He has become a trusted source of news for many, and his reach stretches across every main social network and online media publication.

Pod Save America launched their first episode in 2017, hosted by Jon Favreau, Jon Lovett, Dan Pfeiffer and Tommy Vietor. All four of them former Obama Administration aids, the show breaks down current events and the week’s news with thoughtful and no-nonsense commentary from the hosts.

The show itself averages around 1.5M downloads an episode with episodes being downloaded more than 120M times since November of 2017. Also skewing more toward a progressive audience, Pod Save America is well known for interviewing relevant Democratic politicians, including Bernie Sanders, Beto O’Rourke, Pete Buttigieg, as well as many others.

The podcast has also received positive reception from many popular newspapers  including, New York Times, San Francisco Chronicle, and Newsweek.

The Argument is a political talk show on The New York Times podcast network, the show has had a range of hosts and guests but the current host is Jane Coaston. The show brings in two opposing opinions about a recent current event and explores these two sides throughout the episode. Although not a traditional political/news podcast, the topics of The Argument are always related to what is happening at the time and touch on various nuances of life in America.

It’s first episode aired October 11th, 2018 discussing the confirmation of Supreme Court Justice, Brett Kavanaugh, after a length public confirmation trial in which Mr. Kavanaugh was accused of sexual assault. As the show progressed, it focused on many of Donald Trump’s policies while he was in office as well as cultural issues facing America. In their most recent episode, they discuss American Football and how some feel guilty about watching football, knowing the physical damage it causes players and enjoying to watch “the brutality” of the sport.

With a 4-star rating on Apple Podcasts, this podcast is great to hear both sides of the story and get a better understanding of the entire picture of an issue.

The Newsworthy is a great podcast for listeners who are looking for an update about general news but are looking for a quick and concise podcast. The host, Erica Mandy, used to be a newsroom journalist but quit to focus on her podcast. Since then she has broadcast over 100 episodes on her podcast and was even named one of the “50 Women Changing the World in Media & Entertainment.” The episodes range from about 10-15 minutes where Erica covers topics such as current events, politics, tech news, and even entertainment insights.

The Newsworthy’s first episode launched in 2018, the tone of her show has stayed consistently upbeat with many fans enjoying her unbiased takes and casual style. The show also includes “special edition” episodes where Erica shares some of her personal insight, one example of this would be her most recent special edition episode, “Is a College Degree Worthwhile?”

Although not the traditional long-form of most podcasts, she uploads every Monday-Friday giving her audience plenty of opportunities to tune in and hear what she is reporting on that day.

If “real world” politics or current events are not your cup of podcast tea, the final podcast on this list may interest you. Internet Today is a simulcast (broadcasts on YouTube and podcasts) hosted by Elliot Dewberry and Ricky Hayberg, which talks about internet culture and news related to the internet. With a more lighthearted approach than the other podcasts on this list, Internet Today incorporates playful commentary on their daily “stories” as well as hosting other news related content on their channel.

Other than their almost daily show, “Internet Today,” they also publish a weekly, “Weekly Weird News,” episode which comments on the weirdest news from that particular week. Uploading their first episode on the channel in 2018, the channel now gets around 120k views per video and has over 200k subscribers.

Although the podcast occasionally touches on politics, it’s core audience are people looking to get the scoop on what’s going on in the “internet world,” and those interested in non-mainstream news. The topics they cover on Internet Today are not going to be anything like the stories on traditional news sources.

This list is just the tip of the news/politics podcast iceberg and dependent on your political affiliations, types of news you want to be informed about, or preference of content, there is an ocean of potential podcasts that can fit exactly what you’re looking for.

10 podcasts every influencer should listen to

The anatomy of an ad: Women and Crime x Green Chef

Everything you need to know about podcast advertising